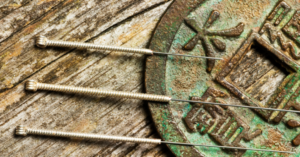 When we think about personal injury cases, we often think about the garden variety claims:  the slip and fall at the grocery store, the fender-bender around the corner, or maybe the dog bite in the park.  But recently a court considered the claims of an 87-year old plaintiff who suffered from burns from a heat lamp during an acupuncture treatment.  She and her husband were awarded significant money damages that were later affirmed on appeal. 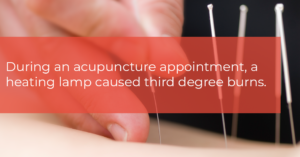 To recover money damages from her injury, Ms. Rosenberg filed a lawsuit. She claimed that the heat lamp should not have been used, she was left unattended, and the doctor failed to respond to her complaints regarding the lamp. Her husband brought a derivative suit, meaning that he too claimed he was injured because his wife was hurt.

The defendants conceded liability and in a damages-only trial on January 27, 2016. Jing-River Acupuncture did not deny liability.  Instead, the only issue was how much money Ms. Rosenberg should receive. The Queens County jury awarded the plaintiff pain and suffering damages in the sum of $175,000 ($150,000 past – 2 1/2 years, $25,000 future – five years). Her husband was awarded $25,000 (past damages only) for his loss of consortium claim. In closing arguments, the plaintiff’s counsel asked the jury to award $800,000 whereas defendants’ counsel suggested an award “in the neighborhood of $50,000.” 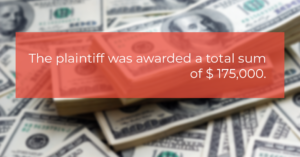 The defendants challenged the severity of the plaintiff’s injuries only through cross-examination, mostly about possible cosmetic procedures that might have lessened the visibility of scars.  But they did not offer any expert medical testimony. Instead, they suggested that Ms. Rosenberg’s wounds took longer to heal because of her diabetes. They also noted that her scars are not generally visible because they are located on a part of the plaintiff’s body that is covered by clothing.  In other words, they blamed the victim and attempted to minimize her suffering.

The defendants appealed, claiming that they did not get a fair trial.  In their appellate briefs, they argued that some questions the plaintiff’s attorney asked were leading, or improper according to the rules of trial procedure. The also claimed the plaintiff’s expert dermatologist testified about the medical history given to him by the plaintiff, or that he did not form his own independent opinion.  The main issue was whether the evidence supported this type of a damages verdict. 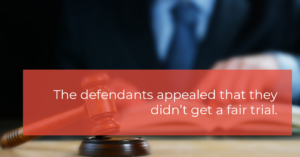 It did. On appeal, in Rosenberg v. Jiang (2017 NY Slip Op 06205) (2d Dept. 2017), both defense claims were rejected by the appellate court and the judgment was affirmed. The plaintiff’s appellate counsel, Arnold E. DiJoseph, III, argued that the appeal was frivolous in view of the conceded liability, “terrible” burns and permanent scarring and he argued that even if a new trial were ordered, defendants “could not have done better than they did” already.

The court found that any error in the admission of testimony was harmless, and they were satisfied that the result would have been the same if the testimony at issue had not been admitted.  This case represents positive precedent for the plaintiff’s bar especially in matters where the only triable issue is that of damages. It is a good, fair verdict for Ms. Rosenberg and her family.