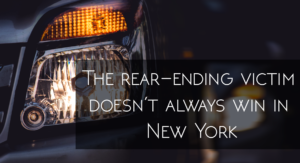 Monica Harris was driving one day when she was rear-ended by Evan Campbell. She, like most people, thought that this would likely be an open-and-shut case — because the person who gets hit always wins in a rear-ending scenario, right? Wrong.

The two parties, Monica and Evan, disagreed on whether there was actually any damage done to Monica in the accident. Monica said she suffered injuries; Evan said the accident was so tiny that there was no way she actually had any injuries. In the end, Monica couldn’t prove her injuries. Leading up to that realization, they took their case to court. First, their case went to trial court, the first round of court that all cases go to. Monica lost in trial court so she appealed it and, in astonishment, they watched their case go on to the Supreme Court of New York, Appellate Division. 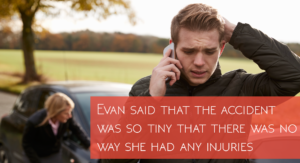 At trial court, it was determined Evan had in fact rear-ended Monica. However, the jury delivered a verdict in favor of Evan because Monica couldn’t prove her injuries.

There were two main issues that came up that hurt Monica’s case.

To prove she had one of these injuries, she had intended to rely on the expert witness of her doctor. However, she didn’t give Evan proper notice of the doctor’s testimony. New York law requires the side using an expert medical witness to fully disclose the doctor’s relevant records and reports. If something isn’t disclosed, then an expert can’t testify on it.

So, Evan said she couldn’t use that witness because she had failed to properly notify Evan of the witness’s testimony. The court sided with Evan and prohibited the testimony 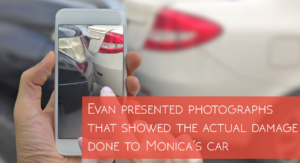 The court again sided with Evan and allowed the photographs because New York law actually allows photos of a car accident to be used as evidence that the accident didn’t cause any injuries.

It was because of these issues that Monica lost. But, she appealed her case to the New York Supreme Court.

The New York Supreme Court, like the lower court, ruled in favor of Evan. The jury found that Monica couldn’t prove any claims of her injuries, hence Evan did not cause any personal injury. Furthermore, the court said the lower court was right: experts can’t testify on issues without giving the other side prior notice, and; photographs can be used to show there were no injuries.

The Takeaway: Be ready to prove your injuries.