A sixty-year old former service officer, Jimmy Dunne, and his wife were travelling to Long Island, New York to visit friends at a toddler’s birthday party.  While waiting at a red light, the couple observed an unrelated three-car collision. They called 911 and while they waited for police to arrive. Jimmy went to check to see if the drivers involved were okay as he knew CPR and first aid.  The police arrived, and Jimmy remained on the scene in order to assist however he could and tell police what he had witnessed. 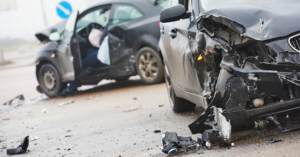 Then a second tragedy struck.  A female driver, Lisa Lloyd, high on over ten different kinds of painkillers, marijuana and cocaine, ran a red light, and swerved into oncoming traffic. Not paying attention, she drove right through the blockade which police and firefighters had set up.  She hit Jimmy while he was walking back to his vehicle so hard that he was reportedly thrown over 30 feet into the air. Witnesses saw him crash to the ground and repeatedly slam his head on the concrete as he skidded to a rest. The driver shockingly blamed the veteran for the accident. She was arrested for driving under the influence of drugs, reckless assault and reckless endangerment.

At the hospital, the doctors performed emergency brain surgery by removing clinically dead portions of Jimmy’s brain.  Jimmy slipped into a coma, and his hip was replaced. For four years after the accident, he’s only known hospitals and rehabilitation centers.

Prior to his accident, the Good Samaritan was a dedicated family man who kept a wide social circle. One of his favorite pastimes was reciting poetry at parties for family and friends. As a result of the massive injuries he suffered in this tragic accident, Jimmy is now limited to very minimal conversation, mostly one-word responses. Moving his head to the side, raising his leg, and counting to ten is are all considered an enormous achievement.  Jimmy will require special care for the rest of his life.

No amount of money could rectify the intense physical and emotional pain the plaintiff and his family have suffered as a result of this accident. After trial, the jury returned with a record-breaking $32,000,000 verdict. After a 90-minute deliberation. The only issue were the damages, meaning the defendants admitted liability and that they were at fault for the accident. Jimmy’s attorneys played a video of him struggling through therapy to recite his favorite poem, proving that he was aware of his own pain and suffering. 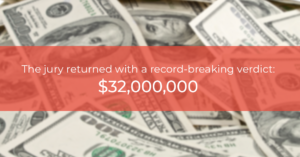 The lawsuit was brought against both the driver and the car dealership that leased her vehicle the same day of the accident.  Lisa’s boyfriend worked at a car dealership, and he provided her with the vehicle that caused Jimmy’s injuries. I think it’s smart to involve multiple parties in a case like this because it increases the likelihood that damages will be paid out.  It’s one thing to have a verdict in your favor, it’s another to see it in the bank account. This is especially true in the case of a drug-addicted driver: she’s likely judgment proof. It’s doubtful that Lloyd’s personal or automobile insurance would have covered even a fraction of the verdict, but under a theory of joint and several liability, the dealership will have to cover the majority of costs.  Jimmy’s health care will be taken care of the rest of his life. He can now live at home with around-the-clock care and be closer to his family. 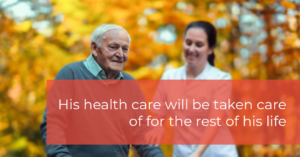