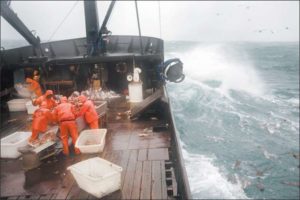 What kind of standards should employers have to comply with? What exactly is a “safe workplace?” This is a question that courts are constantly addressing. What level of safety should an employee reasonably expect? For instance, should a ship captain reasonably expect that he won’t be maimed while performing his duties? For a court in Louisiana, the answer to that question is “Well, that depends.”

In this case, ship captain Raymond Dardar was injured while working aboard the M/V Shelby Courtney ship. To get to the engine room, Dardar claimed he had to first open a heavy wooden door, then open a water tight door, and then step over a doorframe. While in the process of stepping over the doorframe, the heavy wooden door slammed shut on his foot, causing him immense pain and eventually resulting in medical assistance. Not only was he injured while working, but that injury resulted in a worsening of a condition that he already had! Mr. Dardar suffers from a disease that affects his circulation. The worsening of this condition can eventually lead to death.

Mr. Dardar claimed that the ship owner had failed to provide him with a safe workplace by allowing equipment that had failed to work in its proper function, thereby creating a hazardous work environment. Mr. Dardar also claimed that the door was not reasonably safe for the work place and that there should have been some mechanism that could stop the door from slamming on its own. Mr. Dardar sued T&C Marine L.L.C. for lost wages, personal injuries, physical pain and suffering, maintenance under marine law, mental anguish, and attorney’s fees. All together, Mr. Dardar asked for compensation in the form of $2,000,000.

T&C Marine L.L.C. denied liability in the matter and claimed that Mr. Dardar had not been injured aboard the vessel. They went on to say that the ship was seaworthy and made a general denial to all of Mr. Dardar’s claims. So basically, T&C’s main arguments were: 1. Mr. Dardar is a liar (despite eyewitness accounts), and 2. That the workplace was reasonably safe because the ship itself was seaworthy.

In January 2018, the issue went to trial and a verdict was returned on January 24. The jury found that Mr. Dardar had been injured on the ship, but that T&C Marine L.L.C. had not been negligent. They also found that the ship was seaworthy at the time of the accident. The jury then found that Mr. Dardar had an injury or illness which occurred while he was employed on the ship and awarded him $3,500 in cure damages. They also awarded him $72,500 because T&C Marine L.L.C. had failed to provide maintenance and care, punitive damages of $20,000 because T&C Marine L.L.C. had acted willfully and wantonly in not providing care, and attorney fees of an unspecified amount.

The jury awarded the plaintiff a total of $96,000 + attorney’s fees. When compared to the $2,000,000 that Mr. Dardar had asked for, this does not seem like adequate compensation. Mr. Dardar’s existing condition has been exacerbated, affecting his body’s circulation functions, his foot has been maimed, and he received less than half of what he feels he is entitled to! The decision of this court, shows that the workplace is not always as safe as it should be, and to this jury, that is ok.

Allowing T&C to get away with a slap on the wrist will not encourage them to make their boats safer, rather, it will encourage them to change nothing at all. It has signaled to T&C as well as other shipping companies, that as long as the boat is seaworthy, they will not be held completely responsible for accidents that occur on their ships. Mr. Dardar was an experienced captain, stepping over a doorframe to get to the engine room should not have injured him to such an extent. He did not trip or stumble; rather the design of the ship itself, caused him to be seriously hurt. I would have liked to see the jury at the very least give Mr. Dardar the requested $2,000,000. The worsening of Mr. Dardar’s circulation issues, coupled with the potentially permanent damage to his foot, warrants a steeper price than $96,000. Mr. Dardar’s life may have been shortened by this ordeal and his career may have ended. As such, he should have received compensation that could at least cover his future medical needs.